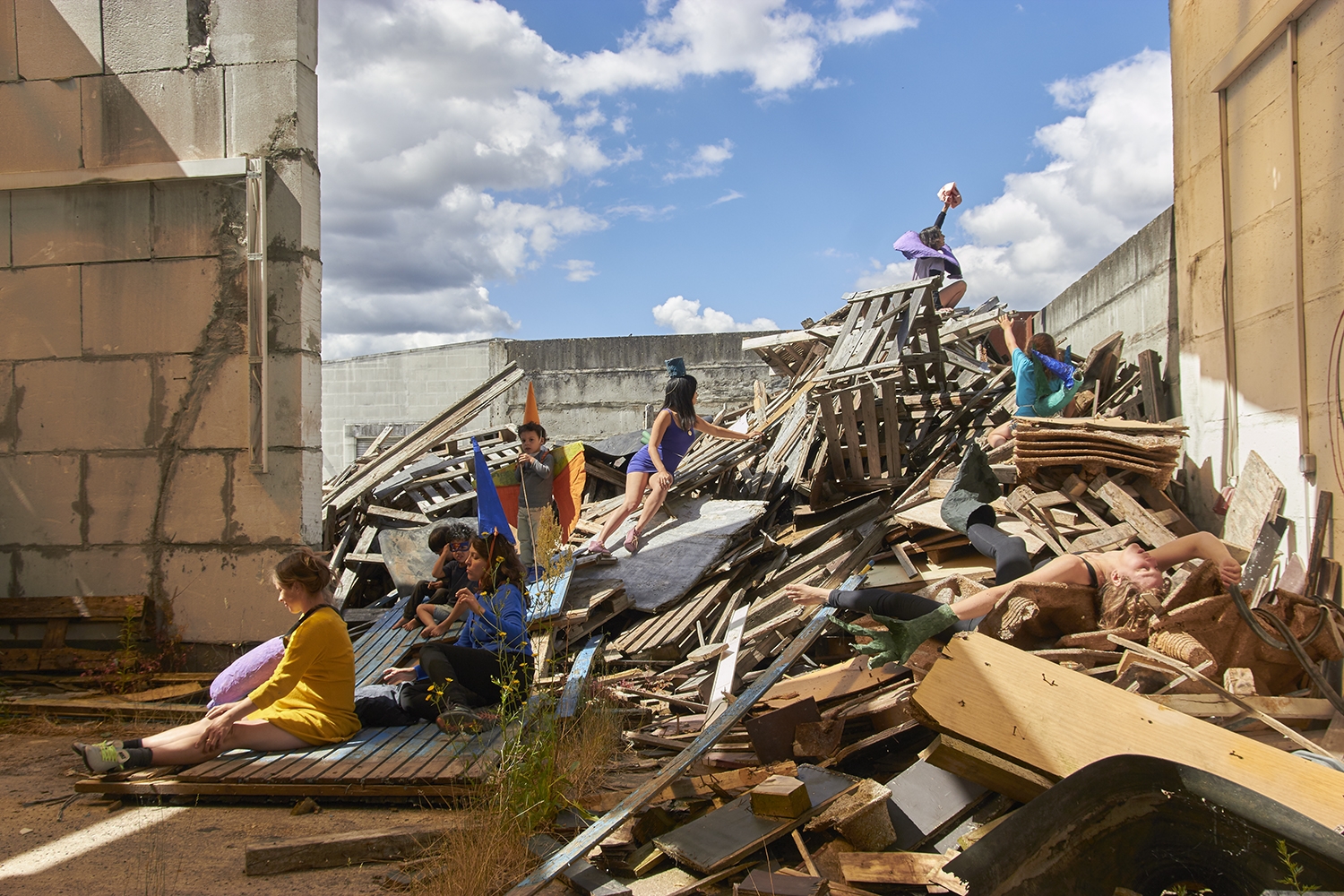 OPENING UP / CLOSING IN

The title points to the dynamic ambivalence between opening up to new ideas and protecting what is consistent or known. In the announcement for the open call, we suggested themes that illustrate this complexity: multicultural, diversity, playfulness, humor, ambivalence, intuition, union and rebellion. Themes to which the artists have responded and which contextualize the exhibition.

«The title also points to a site specific parallel for Rogaland Kunstsenter as it faces a forced uncertainty of staying or moving from its residence of 40 years. Screening the videos from inside the building opening up to and facing the square is a response to this situation».

«Uncertainty, while having a damaging effect on society, the economy and people's mental state, is also a vital and necessary component of the act of creating art. But while it may largely have a positive influence on the creative process, uncertainty has a damaging effect in terms of producing and maintaining the arts.»

The exhibition is produced by Performance Art Bergen (PAB) PAB Lokal and is presented in collaboration with director of Rogaland Kunstsenter (RKS) Jane Sverdrupsen.

«Maternal Fantasies - a collective of artists and mothers - use mixed procedures from feminist practices, children games, activist movements, and surrealists avant-garde techniques to produce fantastical situations that lie somewhere between the everyday, the historic and the transgressive. We consider art, research and discourse as partners which feed into each other and strengthen the verifiability of our investigations. Thus, classic texts on feminist care ethics and maternal theory nourish the group’s artistic production, along with subjective experiences and autobiographical writings, which are transformed into choirs and solos scenes. In our understanding, mothering is not exclusive to a physical and fixed category or identity, but instead represents dedicated time, attention, nurturance, protection, and an interrupted state of mind, which gives rise to a distinctive discipline of thoughts (Ruddick, 1989). In relation to art, our research process is directly affected by everyday, private narratives, site interference, and eco-queer- communitarian-feminist discourses. Therefore, our collective production - which requires the distribution of artistic responsibilities as well as domestic and emotional labor - functions simultaneously as a site of social experimentation and political-performative practice.

«This performance is based on a vocabulary which proposes an alternative relationship between ‘author/creator’ and ‘performer’. This forms the foundation for allowing diversity in terms of collaboration.

The vocabulary is an antidote to the dominating idea that we should all be strong, independent individuals. The focus is on the nature of the relation between 'creator' and performer. The starting point is a poem I wrote about folding: When you fold something, the fold divides, separates and multiplies what is folded, whilst simultaneously, it connects sides, reveals and hides. Folding is a contradictory act, simultaneously deleting and opening up. This is also what happens when we invite others into a performance piece.

They interpret it and it begins to fold (open, delete, reveal etc.). With the vocabulary at the centre, the performer interprets the ‘creator’s' original concept. From their interpretation and needs, a performance is developed. I, the ‘creator’, am present as a constant support and reference point for the interpretation. This is a way to hand over authority and trust someone else’s abilities, both for performer and ‘creator’ who are dependent on each other. As the performer’s interpretation becomes the final piece, the method is open to all abilities and more inclusive.

Christensen lives in Copenhagen and works in Bergen, where she has a PhD position at the Art Academy in Bergen.

«I am using video installation and performance to investigate the representations of reality, representations that unfold between the authentic and fictive constructions. I use my body to interact with a landscape that is both familiar and embedded in me somehow, but also estranged and abstracted. The work explores how we frame the world from a distance, how we embody the world, and how we draw up connecting lines between our internal and external landscapes. How would we experience the world if it was only indoors? A person moves in a limited and little space. The site creates the videos real screen measure and area at the same time constituting an architectural site. It is concrete and dreamy at the same time. Qualities such as time and gravity, up and down, pressure and texture is explored by the performer and the conversation develops»

Performers in the video are Jakob Christensen and Maria Nadia S. Nielsen.

Boga lives and works in London, UK and Adana, Turkey. He has an MA in Fine Art from Central Saint Martins, London and is involved in curating.

«Looking at invisibility as a political possibility. It is a process of experimentation with hand gestures, dance and body language, exploring femininity and masculinity, and ethnic representatives against nationalism. An imagining of visibility for a diverse range of identities and desires. It questions if all LGBTQ people, or sexual minorities, should adopt Western models of gay visibility as a universal model regardless of their social, cultural, or national backgrounds? And what happens when you don't look the part? I tried to look at this complex issue from my own ethnic, social and sexual background. As a Turkish/Syrian-Arab/British/Queer body, how could I avoid choosing between my sexuality and ethnic identity. The video is leading viewers to move within different environments which are sometimes constructed as nature, sometimes roads, sometimes a hammam, labyrinths or as dance clubs. During this journey I tried to form new fantasies and arranged the performance with a repertoire of music from my childhood, archived footage, lyrics, poem and spoken words.»

The exhibition is produced by Performance Art Bergen (PAB), a member organization for performance artists and others interested in visual art performance.

The organization was founded in 2011 and has since then arranged a number of major international performance festivals, conducted international exchanges and had theory programs with seminars and workshops. PAB aims to strengthen and make performance art visible. PAB is based in Bergen, but works both nationally and internationally. All artists shown in this program are members of PAB.